I have always rather liked this quote about the immanence of the Divine, but had not realised that it was entirely lifted from Greek pagan poetry - hurrah! (thanks to my chum Gerardus for pointing this out).

For in Him we live and move and have our being, as even some of your own poets have said, 'For we are also His offspring'. (Acts 17:28)

But thou art not dead: thou livest and abidest forever,
For in thee we live and move and have our being. (Epimenides' Cretica)

Let us begin with Zeus, whom we mortals never leave unspoken.
For every street, every market-place is full of Zeus.
Even the sea and the harbour are full of this deity.
Everywhere everyone is indebted to Zeus.
For we are indeed his offspring... (Phaenomena 1-5).

Address given at Trowbridge, 3 October 2010

The Christian harvest festival seems to be a movable feast, but is generally celebrated at the end of harvest in any given region, and is associated with various harvest customs. Now that we rely less heavily on the outcome of our harvest, the thoughts of churches in the developed world have turned to people in the developing world for whom food production is less secure, and to those in our own society who do not know where the next meal is coming from.

In Jewish tradition, the festival of harvest is Shavuot, which was traditionally the end of the barley harvest and the beginning of the wheat harvest. It is also believed to be the day when the Jewish people received the Torah from Mount Sinai. Traditionally, the 49 days between Passover (Pesach) and Shavuot were a period of semi-mourning, and they are also counted in anticipation of the giving of the Torah. There are a number of theories for why Jews view this period with sadness, one of which refers to a plague that killed many students of the famed Talmudic sage, Rabbi Akiva. It is also a custom to stay awake and study the Torah the night before Shavuot, as it was believed that the Israelites mistakenly feel asleep the night before receiving the Ten Commandments. 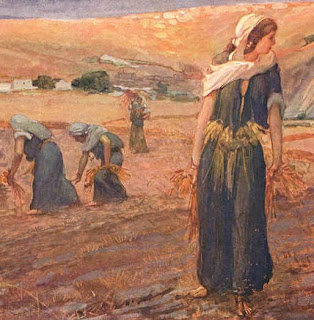 One of the traditional readings for the festival of Shavuot is the story of Ruth and Naomi, which is why I chose it for our story today.

In Pagan tradition, there are three harvests; the corn harvest at Lammas; the fruit harvest at Autumn Equinox; and the harvest of meat at Samhain, when some of the cattle would have been slaughtered and preserved for the winter. Lammas commemorates the death of John Barleycorn, the dying-and-resurrecting vegetation god. The corn was believed to be inhabited by the corn-spirit, which was killed at every harvest and resurrected in the planting of the new corn. In Ireland, Lammas was celebrated with games in honour of the goddess Tailtiu, the mother of Lugh the sun god, and was called Lughnasadh.

Autumn Equinox was not celebrated everywhere in the ancient world, but it is regarded by contemporary Pagans as a point of balance, because it is the time when day and night are equal. It is also the fruit harvest and a time to celebrate Pomona, goddess of fruit, and her consort Vertumnus, god of change. In Jewish tradition, it is Rosh Hashanah, the birthday of the world, when God created everything.

Samhain or Hallowe’en is a much-misunderstood festival. To the ancient Celts it was a celebration of freedom from oppression; contemporary Pagans have adapted the Catholic festival of All Souls, and regard Samhain as a time when the veil between the worlds is thin, and people can commune with the ancestors and the beloved dead. Some Unitarian congregations have started to celebrate Samhain by commemorating their relatives and friends who have died.

People like customs and festivals because they mark transitions; the changing seasons, the tides of our lives. The Jewish tradition is particularly rich in seasonal customs, special foods, and symbolic actions, which help to connect the life of the individual to the great cosmic story. Similarly, contemporary Pagans have sought to re-create the richness of the seasonal festivals. Unitarians can draw from the festivals of many traditions; but I think we should be respectful of their original meaning and context.

But what is the inner meaning of harvest? I am reminded of Jesus’ saying: “As you sow, so shall ye reap.” Many of you are probably familiar with the film It’s a Wonderful Life, in which a man is just about to commit suicide because he has ceased to see meaning in his life, when an angel comes and shows him all the differences he has made to the lives of others, and what the world would be like without him in it. He is a bank manager, who has lent people money when they really needed it; he is a family man who has made his wife and children happy. He has carried out many small kindnesses, and that has made all the difference.

Each of our small acts of kindness can make a real difference in the lives of others; even a smile can make someone else happier, which means they are more likely to smile at others, or be kind to them – who knows how far the harvest of one small act of kindness may spread?

As Louis Macneice observed in his poem, Fanfare for the Makers (which was quoted recently in the TV comedy Rev), sometimes we plant trees but do not see them reaching their full height, and “sometimes one man’s kindness pervades / A room or house or village”, and “mothers sit up late night after night / Moulding a life”, so each act of kindness can “lend the passing moment words and wings”.

Sometimes we feel powerless in the face of all the suffering and oppression in the world, but we can each do our bit. Even signing internet petitions and donating to charity can make a real difference to the lives of others, and you don’t even have to leave your chair to do that.

Another saying of Jesus was “By their fruits ye shall know them”. I once attended a sermon by Ashley Hills where he told the story of a 19th century Unitarian tea merchant. Although his fellow-citizens deplored his choice of theology, they always bought their tea from him because they knew he was an honest fellow who always bought the best quality tea and never adulterated it with other things. They knew him by his fruits, or should that be by his tea? This seems to me to be harvest-related, too.

Harvest is a time when we count our blessings, and seek to share them with others less fortunate than ourselves. Just as Boaz shared the harvest of his fields with Ruth and Naomi, so we are sharing the harvest with the homeless. We are mindful of the gleaners at the margins of the fields. Ruth was a Moabite and not an Israelite, and was related to Ruth by marriage. She had decided to go with Naomi, her mother-in-law, after her husband had died, because of the great love she felt for her. If she gleaned the leavings of the harvesters in any other field, the book of Ruth implies that it was likely she would have been harmed by the harvesters, perhaps raped. So it was an act of radical hospitality on the part of Boaz to allow her to glean in his field. More recently, lesbian Christians have interpreted the story of Ruth and Naomi as an example of same-sex love, because Ruth said:


Entreat me not to leave thee, or to return from following after thee: for whither thou goest, I will go; and where thou lodgest, I will lodge: thy people shall be my people, and thy God my God: Where thou diest, will I die, and there will I be buried.

This quote has often been used as a marriage vow, apparently. Whether or not they were actually lesbians in the modern sense is not important; the fact is they clearly loved each other a great deal, and their story is very inspiring to women who love women.

Unitarianism is also radically hospitable, since we were the first denomination to ordain women, the first to include lesbian and gay people as complete equals, and we have consistently sought to widen our circle of inclusivity. Why, then, are people not flocking to our door? The reasons could be many and varied; but one reason may be that we are hiding our light under a bushel, and not getting out there and showing people that they are welcome at our table. In order to reap the blessings of community, we need to be radically hospitable; and sometimes that can mean being open to change – change that might not be particularly comfortable to embrace.

There is also the problem that people generally do not understand liberal religion, because they think religion is all about what you believe, not about what you do. But it’s up to us (and other liberal religious groups) to show them that it doesn’t have to be like that. You can have a religion where you don’t have to leave your brain at the door; where symbols are resonant with many layers of meaning; where heart and mind can be fed; where we can live in beloved community with one another.
Amen.
Posted by Yewtree at 14:19 3 comments:

I continued my practice of lectio divina with Dry Salvages, the third poem in Eliot's Four Quartets. I have always liked the first section, which begins "The river is a strong brown god". This section seems to be about the immanence of the Divine in Nature, and the multiplicity of spirits of place. In the second stanza, the rhythms of the sea could be seen as a metaphor for the Divine in which we live, move and have our being.

I found the rest of Dry Salvages quite difficult. Eliot contrasts cyclical time and linear time with Christian ideas of eternity, and the eternal now. I like the idea of cyclical time, with its tides of sowing, growing, reaping and resting, its shifts from outwardness to inwardness. I also like the idea of the eternal now, but Eliot seems to regard both past and future as rather dreary (which they are in linear time), and to regard cyclical time as an endless repeating of the same old stuff. In my experience, cyclical time is the repetition of stages, but each stage has similar elements and different elements, so the combinations of experience are always new.

I did enjoy the descriptions of the eternal now:

...to apprehend
The point of intersection of the timeless
With time, is an occupation for the saint—
No occupation either, but something given
And taken, in a lifetime's death in love,
Ardour and selflessness and self-surrender.
For most of us, there is only the unattended
Moment, the moment in and out of time,
The distraction fit, lost in a shaft of sunlight,
The wild thyme unseen, or the winter lightning
Or the waterfall, or music heard so deeply
That it is not heard at all, but you are the music
While the music lasts. These are only hints and guesses,
Hints followed by guesses; and the rest
Is prayer, observance, discipline, thought and action.
The hint half guessed, the gift half understood, is Incarnation.
Here the impossible union
Of spheres of existence is actual,
Here the past and future
Are conquered, and reconciled,
Where action were otherwise movement
Of that which is only moved
And has in it no source of movement