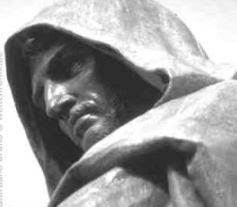 (tune: The Harp That Once)

The secret pulse of freedom throbs
In every human heart:
From martyr, mystic, heretic
The song of freedom rang.
The holy day was made for us
Not us for holy day. [1]
And human laws should shield from harm
Not cage the human heart.

The sacred rose of love divine
Blooms in awakened hearts;
From each to each the answering sign
Leaps like enkindled flame -
Love knows no bounds, not even death -
It lightens every hour;
For to all true philosophers
The whole wide Earth is home. [2]

When reason sings in harmony
With intuition's tune
And light the darkness shall embrace
In deep soul alchemy
Then shall the Earth with freedom ring:
And all Her children sing:
"Love and peace shall be our sole creed
And banish human greed."

Email ThisBlogThis!Share to TwitterShare to FacebookShare to Pinterest
Labels: Unitarian

All Hallows and Samhain

(conversation-style address at Frenchay, November 2007)
I am a Pagan because I love the land, the Earth, and Nature. I love the sea, the rocks, the mountains, the woods and the fields, and the wild creatures that live among them. I love Pagan mythology and Pagan ritual, because they affirm our place in Nature, not set apart from it, but at home within its cycles of life, death, and rebirth. Paganism celebrates the Divine Feminine in the form of the Goddess, and her consort, the Lord of Animals.

It's a feeling of coming home. The words, the energies, and the space are beautiful and resonant. This is the place between the worlds, where we walk on the edge of time and space, with one foot in the otherworld, a space where you can commune with the universe, develop the self, engage in sacred play, and honour the divine within each other. Celebrating the beauty of the night and the human body. The ecstatic leaping across the fire, wild and free. The flames, symbolic of life and passion... The feeling of journeying together to other worlds, communing with the ancestors, the land, and the spirits of the land. Walking with gods and goddesses.

Why be a Unitarian?

I believe that the Spirit of Life is both one and many – that we and all other entities with whom we share this planet are part of that Spirit, and I believe that Unitarians and Pagans (and many others) are honouring the same Spirit of Life. I have always admired Jesus as a religious radical who wanted to get rid of unnecessary rules and anything that blocked the flow of the Holy Spirit, and to concentrate on the important things: compassion and living responsibly and responsively. But I regard him as one among many avatars or bodhisattvas – not as the one and only manifestation of the Divine on Earth – everything that lives is a manifestation of the Divine. I have also always liked Unitarians as being the most interfaith, the most open-minded, and socially active without trying to convert people of other faiths. One of the reasons I stopped being a Christian at the age of 15 was that my best friend was (and still is) gay, and all my Christian friends said this was wrong. Unitarians have always welcomed lesbian, gay & bisexual people, which is very important to me; and also it was the first denomination to have women ministers – another very important point to a life-long feminist such as myself. I also like the hymns, and the way people are encouraged to think for themselves and be individuals, and the way you actively build community, and the way that that community can accommodate people with very different ideas about religion.

Samhain and All Hallows
Samhain is the Irish word for the month of November. The ancient Irish festival held at this time was about the renewal of freedom – legends associated with it tell of heroes who freed their people from bondage. So the association with the dead was probably imported to this country by Christianity, as this was the feast of All Saints and All Souls. After the Reformation, of course, the importance of these festivals was downplayed, and by the early 20th century, folklorists were speculating that the origins of All Hallows were actually Pagan. The first stirrings of the Pagan revival started in the early 20th century, so the idea of Samhain being associated with the dead was imported into Paganism.

Like Unitarians, Taoists, and Zen Buddhists, Pagans tend to focus on the preciousness of this life, not some future one beyond death. Hence we want to celebrate and remember the lives of our ancestors. Ancestors can be relatives and friends who have died, or people from the past whom we admire (we often honour both). These people have shaped who we are now – given us life, given us inspiration, guided us, comforted us, and nurtured us – and it comforts us to remember them and commune with them.

Most Pagans believe in reincarnation, and that the consciousness resides in an in-between place between lives. It is this consciousness with which Pagans commune when we remember our beloved dead at Samhain. The dead are seen as not being very far away – only a heartbeat away – and many Pagans say that “the veil between the worlds is thin” at Samhain, because the tides of life are on the ebb as winter approaches, and because the encroaching darkness of winter is seen as a time for contemplation, remembrance, and introspection.

Samhain or Hallowe'en is one of eight festivals of the Pagan wheel of the year – part of the dance of the elements around the wheel of the seasons, one of the many interlocking cosmic cycles of which our lives are an intimate part.