Liz Williams has a great post about how TV can make one blasé about suffering.

This is why I don't watch the news on TV and have not done so for about 2 decades (deliberately so for the last decade). Watching things on TV inures us to them - it is external, somehow unreal, "just a story" — an attitude which is encouraged by the way the newscasters constantly refer to items as "stories".

I listen to things on the radio, where they frequently make me cry. This morning I heard a story about the death of a 17-year-old pilot in WW2, which made me cry. It was on Desert Island Discs with Martin Shaw. His mother met a young pilot in a tea-shop, just before he was sent to war. They danced to a song called J'attendrai by Tino Rossi. He asked if he could write to her. Three weeks later she received a letter from his commanding officer saying that he had been killed on his first sortie, and they had found her address in his wallet.

When they recited the list of those killed in the World Trade Centre, that made me cry. Another occasion when I cried at radio news was a story about some Australians crossing the desert to free some asylum seekers from a detention centre. It always makes me cry when people help others where there is no particular benefit to them for doing so.

Another way to prevent oneself becoming blasé about news is only to read the weekly newspapers, which summarise the events and give a slightly longer-term perspective. (This was an approach recommended by Thomas Merton.)

Of course, if one spent all one's time weeping over the suffering of others, one would be completely useless for anything else, including doing something to alleviate it — but I still wouldn't want to ever become inured to it. There is a sort of mental trick whereby one can set aside one's involvement and focus on solving the problem and seeing it objectively, but that takes some time to acquire.
Posted by Yewtree at 16:13 No comments:

Queer theologians are in no doubt that the message of religion, and the nature of the divine, transcends gender and sexuality, and yet embraces gender and sexuality, the world and our bodies. But mainstream theology is having a hard time keeping up with the cutting edge.
Should religion be about transforming the world, or celebrating it? This is at the heart of religious conflict on the issue of human sexuality. But if the central message of religion is love, connection, compassion, then loving relationships are part of the solution, not part of the problem. In Wicca, we have a saying, "All acts of love and pleasure are Her rituals", and that means all, including same-sex love. Similarly, Unitarians and UUs have been LGBT-affirming for decades.
I want to celebrate the brave pioneers of LGBT spirituality, and the continuing activism of those who seek to end religious homophobia.
Soulforce is an organisation that campaigns for freedom for lesbian, gay, bisexual, and transgender people from religious and political oppression. They engage in dialogue with homophobic organisations and religious spokespersons.
The LGBT Religious Archives Network coordinates identification, collection and preservation of personal papers and organizational records from lesbian, gay, bisexual and transgender religious people. There are some truly inspirational stories on their website, and it is a vital historical resource.
There are many more individuals and groups out there speaking up for the inclusion of LGBT people in religious life - too many to list here. I will leave you with two examples to illustrate why including LGBT people is so important:

Peggy Neff and Sheila Hein made their lives together for eighteen years. Then, on September 11th in 2001, Peggy was aboard the plane that was hijacked and flown into the Pentagon. Like so many surviving husbands and wives, Sheila’s life was torn apart. And like so many others in her situation she sought assistance in her home state. The response she received was “Please accept our condolences on the loss of your friend. We regret to inform you that you are not eligible to file a claim under (the) Virginia Victims of Crime Act.”

from Don't be Afraid of Change: A Briefest Reflection on the Dynamic of Creation by James Ishmael Ford

There are many more examples like the one above that happen every day around the world.
The second example was a leaflet, If I told you, a collection of essays by LGBT college students. It was the saddest thing I ever read. In it, various college students told of their isolation and fear at having to hide their sexuality. Sadly it is no longer available online, but I copied some excerpts.
Of course, none of this will reassure people who feel that their tradition, or their holy book, tells them that LGBT sexuality is wrong. I am sure they feel that they are listening for the Divine will in their adherence to this view. So there's no point in shouting at them - we need to calmly engage in dialogue, examining their (and our) underlying assumptions, patiently going through the texts and the traditions, listening to their fears, and so on. That is why the work of people like Soulforce and the Equality Riders is so important, because it's all about changing the hearts and minds of the anti-gay lobby in a non-confrontational way.
This post is part of the Bridging the Gap synchroblog.
Posted by Yewtree at 16:31 4 comments:

We have been with you from the beginning

I have just finished an article on the historical Pagan tendencies in Unitarianism (and UUism). Many people think that the Pagan or Earth Spirit element in Unitarianism started around 1980 with the foundation of CUUPs (Covenant of Unitarian Universalist Pagans) in America. In fact, it has its roots in some much earlier developments.
Both Paganism and Unitarianism are world-affirming, and share some important values - not least being the belief that the Divine is / deities are immanent in the world (held by most Pagans and many Unitarians). From this stems a belief in the importance of human reason (because we are inherently good), the tolerance of alternative visions of the world, and the importance of freedom to explore one's beliefs and values without constraint of creeds.
Posted by Yewtree at 17:57 2 comments:

Jarred at Musings of a Confused Man has drawn attention to a forthcoming synchroblog about bridging the (perceived) gap between faith and sexuality.

I have my doubts about the intentions and outcomes, but I'll certainly be participating on 24 June and sharing the Wiccan and Unitarian perspectives on this.
Posted by Yewtree at 12:16 1 comment:

If one were to try to pare religion down to its common essentials, there wouldn't be much left. The only thing that I can see that all religions have in common is the symbolism of the union of masculine and feminine: in Christianity, Christ and His Bride the Church, who are waiting till the end of time for the wedding; in Hinduism, the union of Shiva and Shakti; in Judaism, Yahweh and the Shekhinah; in Sufism, the union of Lover and Beloved, or Allah and the soul; in Wicca, the union of the God and the Goddess; and so on. There are many values that different religions have in common, though.

If you do the Belief-o-matic questionnaire, you can see exactly how much your religion's beliefs and values overlap with others.

The different philosophy, theology, atmosphere, traditions, practices, meanings and mythology of different religions is what makes them unique. Some people call this particularity. It can be distinguished from exclusivity (the view that each religion is self-contained and does not need input from outside) and sectarianism (the idea that only your religion is true) by the fact that, while its practitioners love its unique features, they are prepared to acknowledge the worth of other people's traditions for them. Each religion has its own stories, its own colours, its own frequency for tuning in to the numinous; and each has blind spots towards certain aspects of the Divine (e.g. mainstream Christianity's is the inability to see sexuality as Divine and spiritual) but that doesn't mean we can't appreciate each other's stories and learn from them.
Posted by Yewtree at 11:53 No comments: 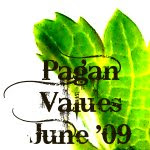 It is difficult to say with certainty that all members of the Pagan community subscribe to the same or similar values (it's always possible to find an exception who still counts as Pagan), but certainly many, if not most, Pagans aspire to certain core values, even if we don't always achieve them.
Most of our values stem from the belief that the Divine is immanent in the world, not separate and distant from it; because All That Is is a manifestation of the Divine, a theophany, it is sacred, not profane.  Therefore sexuality is sacred, food is sacred, the Earth is sacred, animals are sacred, plants are sacred, pleasure is sacred.  I am holy, you are holy.
Tolerance / acceptance: most Pagans aspire to tolerance of what they disagree with, and sometimes even acceptance of it, as something they cannot change.  Many argue for genuine acceptance of other paths and lifestyles.
Personal responsibility ("An it harm none, do what thou wilt"): we are each responsible for our own actions.  That includes an ethic of environmental responsibility.
Inclusivity:  Most Pagans believe that sexuality in all its forms is sacred; that includes all forms of consensual sex between adult humans, including same-sex relationships, SM and polyamory.  Pagans are also strongly feminist, affirming the equal worth of women and men.
Most Pagans do not exclude others on the grounds of different belief; rather we look for companions on the spiritual path who share our values and interests.
Tread gently on the Earth: Most Pagans are concerned about climate change, animal experimentation, and pollution, and try to tread gently on the Earth.
Interest in science and rational/empirical enquiry:  Most Pagans affirm the worth of science as a way of understanding the world and appreciating the wonders of the universe.  Pagan understandings of the world do not conflict with science.
Posted by Yewtree at 20:59 No comments: