I've just been reading On Forgiveness: how can we forgive the unforgivable? by Richard Holloway. In it, he talks about the radical change that can be brought about by forgiveness (for example, the Truth and Reconciliation Commission in South Africa). Forgiveness is one of the practices that a community needs if it is going to function effectively. It is not something that can be done lightly; it's not about just forgetting what has been done. It is a radical act, and not one that you can command people to do - but it can be developed as a spiritual practice. Another important factor in the development of community is compassion (for ourselves as well as others, and for all living things, not just humans). Compassion can include empathy, love, pity, and mercy. And finally, a certain amount of humility might be useful. Humility literally means "closeness to the Earth". By humility I mean a willingness to accept our own shortcomings. "Let he who is without sin cast the first stone." I do not mean that we should only focus on our shortcomings; compassion requires that we and the community should also celebrate our strengths; and if the community celebrates our strengths, it can also benefit from them.
Posted by Yewtree at 09:38 3 comments: Links to this post 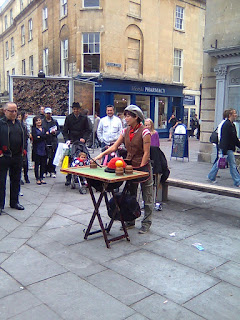 Posted by Yewtree at 11:39 No comments: Links to this post

Part one deals with Unitarian principles and values; part two deals with specific issues (the environment, sexuality, gender, etc.) and part three is about how to live Unitarianly. There's a good balance between male and female authors, and the various different perspectives from within Unitarianism are included - Christian Unitarians, Buddhist Unitarians, Earth Spirit / Pagan Unitarians, Humanist Unitarians, universalist (in both the modern and the older sense) Unitarians, and just plain Unitarians. It also includes voices from both sides of the Atlantic, and Unitarians and Universalists of both the past and the present. If you are wondering what all these diverse groups within Unitarianism have in common, it is the shared values of freedom, reason and tolerance (and all that stems from these three).
Posted by Yewtree at 11:02 No comments: Links to this post